PITTSBURGH, April 19, 2016 – Two of Pittsburgh’s titans of organ donation and transplantation recently teamed up to become even more of a force for good throughout the region.

During a Pep Rally event for the upcoming Transplant Games of America on Saturday, April 16, the Center for Organ Recovery & Education (CORE), a federally designated not-for-profit organ procurement organization (OPO) serving Pennsylvania, West Virginia, and parts of New York, announced it would officially unite with Team Pittsburgh, an organization dedicated to broadening awareness of organ, tissue and cornea donation through events like the Transplant Games, in a formal partnership.

The partnership will take form with Team Pittsburgh establishing 501 (c)(3) nonprofit status and will function with the help of CORE’s administrative resources, including business, accounting and marketing support.

“We’ve worked together for many years, and it’s wonderful for our relationship to finally be formalized,” said Susan Stuart, President and CEO of CORE. “This official partnership represents the joining of two forces working toward a shared cause: supporting and celebrating the lives of those affected by organ, tissue and cornea donation and transplantation.

“CORE has always provided Team Pittsburgh with lots of support, whether moral or in other capacities,” said Colleen Yost, team manager for Team Pittsburgh. “This formal partnership will allow us to expand upon our mission and better serve even more individuals touched by the Transplant Games.”

The event, which took place at CORE’s Pittsburgh headquarters, was anchored by a procession of athletes who will compete in this summer’s Transplant Games. Donor families, transplant recipients and living donors signed a flag that will travel across the country for more than 40 other participating teams to sign. The flag will then return to Cleveland, where it will fly during the opening ceremony of the Transplant Games.

For more information about CORE, visit core.org or call 1-800-DONORS-7.

The Center for Organ Recovery & Education (CORE) is one of 58 federally designated not-for-profit organ procurement organizations (OPOs) in the United States.  CORE works closely with donor families and designated health care professionals to coordinate the surgical recovery of organs, tissues and corneas for transplantation.  CORE also facilitates the computerized matching of donated organs and placement of corneas.  With headquarters in Pittsburgh and an office in Charleston, West Virginia, CORE oversees a region that encompasses 155 hospitals and almost six million people throughout western Pennsylvania, West Virginia and Chemung County, NY.  For more information, visit core.org or call 1-800-DONORS-7. 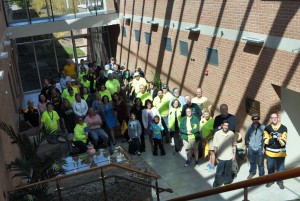 Team Pittsburgh (pictured) is comprised of recipients, living donors, donor families and healthcare professionals to individuals interested in organ donation and transplantation. The athletes will compete in this year’s Transplant Games (June 10-15) in Cleveland.